The artist Rembrandt van Rijn painted more than 40 self-portraits. Some of the best known he made later in life, like this one now on exhibit at the Seattle Art Museum as part of “Rembrandt, Van Dyck, Gainsborough: The Treasures of Kenwood House, London.”

Collected at the end of the 19th century by Edward Cecil Guinness (the brewery heir), these 17th Century Dutch and Flemish paintings are often huge, filled with gauzy dresses and clouds, rosy or porcelain-white cheeks, battlefields, hunting dogs, ship-crowded harbors, hats of every persuasion, and the fruits and flowers of trademark Dutch still life. It’s a rich exhibition, including Rembrandt etchings, and an extra gallery with paintings of the period from Seattle collections.

My clever friend visited the show earlier this spring and found herself inspired to add unexpected design elements to the quilt she is working on. I left thinking about Rembrandt’s self-portraits. How hard self-portraits are to do, how easy to avoid, and about Rembrandt living only a few more years after he painted the one at the museum.

So I made an attempt (harder to do than ever). The only commonalities with Rembrandt being a certain grayness, the many layers of clothing we wear for work (a fur-lined cloak for him, several sweaters for me) – and keeping on. 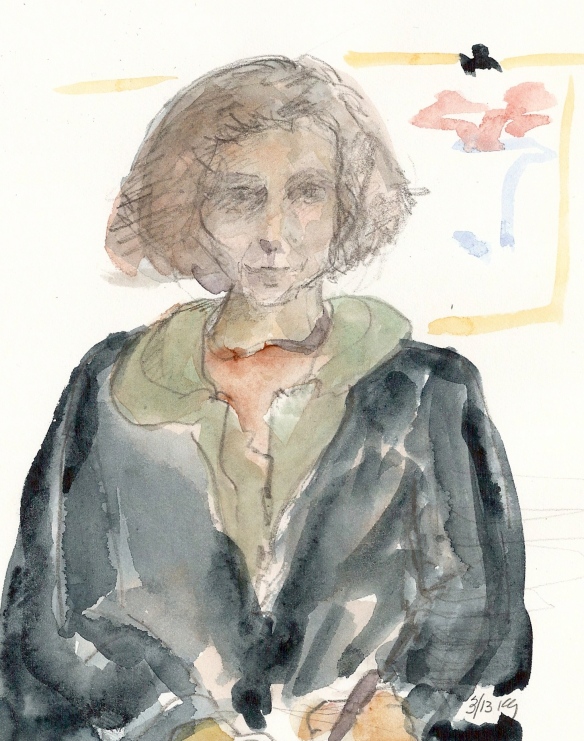