It’s January and cold – in Washington these days the thermometer rarely tops 32° and sinks to 22° – making me long for our usual winter 42° and appreciate house and heat.

This month I try to turn my attention to the house, clearing Christmas, which stops looking jolly and becomes clutter (except the tree, those lights are still so welcome). And January also invites more organizing, seeking comfort and cheer from order.

But in numerous ways I avoid those tasks. Although this year, I happily reboxed Christmas on January 6, energized after reading about the Irish tradition of “Women’s Little Christmas,” the old, but still observed celebration of the women (and surely now men), who worked so hard to make the holidays for their families.

A more typical stalling maneuver is to look at books about houses, including a Christmas present, Ben Pentreath’s “English Houses,” a beautiful book full of photos of loved houses that creak with tilted floors and worn Turkey rugs. Pentreath introduced a room new to me, the “snug,” a tiny room with books and fireplace looking just like the word. (I discovered while writing this that Pentreath writes a blog about his life in Dorset:    http://www.pentreath-hall.com/inspiration/).

And this January I miss “Red House West” – may it return soon! I did see a Pin from the blog’s proprietors of an imaginative under-the-stairs bed, cozily curtained off. And I began thinking about how certain house elements, sunny French windows, odd but comfy chairs, deep window sills, long pine tables make me stare at a photo and want to be there.

Leanne Shapton, an illustrator I admire, said she processes life by employing series and repetition in her work. Maira Kalman does that too. And an artist, Debbie George, I discovered while painting teacups last November, paints antique teacups and flowers one lovely image after another.

January lets such thoughts string together into a project. So, I’m going to look for little moments in rooms that make a difference – quirks, rumples, using houses I know or photos from books or the Internet. Done up doesn’t always do it, but personal often does.

And I can start with this little poem that William Morris had embroidered around the top of his four-poster bed:

The wind’s on the wold

And the night is a-cold

But kind and dear

Is the old house here,

And my heart is warm 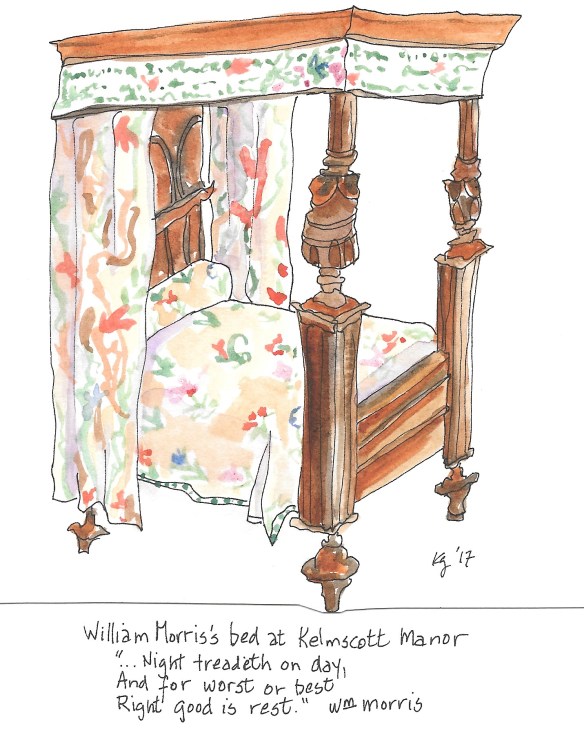 Never enough but all of it good! Hilary Mantel’s unforgettable Thomas Cromwell accompanied me on airplanes as I devoured “Bring Up the Bodies” – the second book in Mantel’s “Wolf Hall” trilogy. You know how it all comes out – what happens to Anne and even Jane, the next in Henry’s lineup. That doesn’t make any difference to the utter pleasure of reading Mantel’s recreation of the moments and manipulations of Henry VIII’s wife exchanges. I stalled, paused in my reading often, because I didn’t want the book to end.

And on takeoffs or landings, or in bed – I enjoyed another of Vicki Lane’s Elizabeth Goodweather mysteries (“In a Dark Season”). Elizabeth, Katherine, Anne, Jane – such classic names – such different characters.

Two other books occupied August. Since Mr. Carson and Mrs. Hughes recommended it, I read, near gobbled up, after a visit with Lady Baby, John Medina’s “Brain Rules for Babies.” I wish I’d read this book when I was a young mother – it’s full of wisdom about babies and about negotiating married life in the company of babies and children.

Medina’s basic rules are twofold: Start With Empathy and Focus On Emotions. He describes two simple questions to ask that help create an “empathy reflex – your first response to any emotional situation.” Because he is a scientist, a developmental molecular biologist, he uses numbers and the results of modern research to back up what often seems common sense – explaining why parental time and attention matter and that spanking isn’t a good idea.

It’s a great book for parents and grandparents. Toward the end, he writes: “You may think that grownups create children. The reality is that children create grownups. They become their own person, and so do you. Children give so much more than they take.”

The other book, the most unusual, is by Leanne Shapton, an illustrator I admire. I’d ordered “Swimming Studies” for my Kindle app by mistake, and read it in one Anchorage-to-Seattle sitting. Luckily, my husband got the hardback. It comes with no dust jacket, end flap material printed where endpapers might be, and an embossed bathing cap on the water-blue cover.

The book is Shapton’s memoir of her life as young swimmer training for Olympic trials, her continued fascination with water and bodies in water, and her eventual turn toward art. She’s brave and honest, and her descriptions transport – you feel the squeeze of a bathing cap, the atmosphere in a bus full of young athletes on their way to a competition, the chlorinated air of swimming pools, her elation, and her exhaustion.

Her book isn’t a sport memoir so much as a meditation on her journey (often a watery one), as Shapton figures out how her former swimming life inspires her life as an artist.

Because I’ve been thinking about people’s thoughts and plans for participating in The Workroom, it resonated when Shapton quoted “The Nuts and Bolts of Psychology for Swimmers,” by Keith Bell. He writes about training discipline, the nonnegotiable commitment to practice. Words that apply equally to working on a creative project, once you have set a goal: “It doesn’t make much sense to have to decide whether to take each individual step in a trip you have already decided to make.”

I love Shapton’s watercolor portraits of fellow swimmers, rectangles of pool water, and gallery of vintage swimsuits – in both digital and paper forms (and it was fun to compare the illustrations) – the book is a treasure! 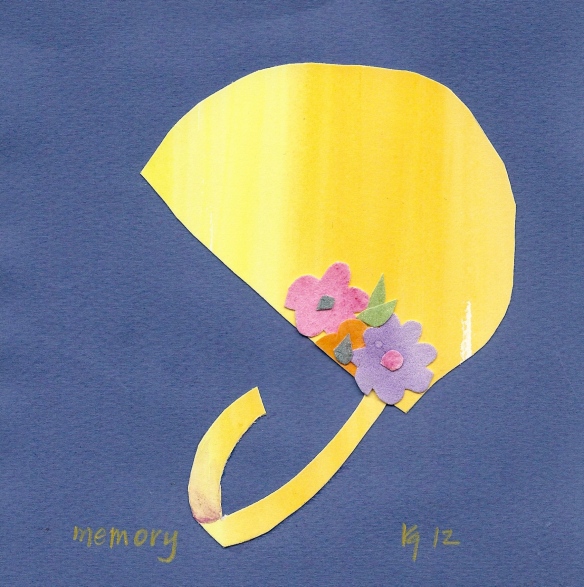