The Access Program at the University of Washington allows anyone over 60 years of age to audit any class for free. My husband is taking a class this summer, and I tagged along on a dry run to see if the 6:20 a.m. ferry to Seattle would get him to class in time. My assignment was to time each segment.

Using Winslow’s short cuts, worn by footsteps along the edges of developments or private property where owners allow the tiny trespasses that shorten a commuter’s walk, it takes 15 or 20 minutes to walk to the ferry from our house, all downhill. Not quite replicating a school day, we took the 9:30 a.m. ferry, and planned the rest of the route during the 35-minute crossing.

Seattle’s light rail system runs from the airport to the University, along a corridor through downtown with two stations a few blocks from the ferry. The ride to the University, which seems complicated and long when you drive, is only 17 minutes by this underground train. Arriving at the University Station and riding escalators three flights up, put us at the base of a wide tree-lined walkway – a grand, 20 minutes-by-foot approach to Drumheller Fountain, and the center of this venerable campus. (Total elapsed time door-to-door – about one and a half hours – I confess to losing track a little.)

Classes aren’t in session right now, but individual departments were holding their graduations. Many young people passed us wearing black academic gowns over festive summer outfits. Rain began to fall, but like most Washington folk, they eschewed umbrellas.

The Registrar’s Office was closed for lunch, so we headed to the Suzallo Library, which used to house the Special Collections (now moved to a climate controlled modern building, safe for books, but missing romance). These days a startling Starbucks is just inside the Suzallo. In a huge room retaining the old stained glass windows, at many tables and comfy chairs, the graduates and their support teams took a break from the rain. A mural high on a wall is dedicated to coffee from bean to cup, and the critical role of coffee in the pursuit of knowledge and camaraderie.

The target class is Accelerated Greek (8:30-10:30 a.m., five days a week), so we headed to the Classics Department in Denny Hall, the oldest building on campus. A remodel has updated the building, but classical sculptures stand by windows and hint at the academics within. We located Parrington Hall where the class will be held, returned to the Registrar’s office, then walked to the University Bookstore –– a place we’ve often been for books and art supplies, but never an assigned textbook. Seriously flagging now, we caught a bus back to the light rail station, headed down to the ferry, rode across, and walked home.

I admire my husband’s unquestioning ability to get up in time to make that class – and enjoy the discipline of the whole experience. Such a beautiful place with much potential for learning – many exciting possibilities!

This isn’t the post I meant for today. But I was sick all day yesterday at the growing news of how “our” government is separating children from their parents in the name of the “law” (in truth an easily reversible policy), and “just doing our job” (doesn’t that have a familiar ring?). I could go on about this cruel, immoral policy, but you already know. How do the people responsible sleep at night? Or hug their own children? Or explain to their children!

And then I heard that audio tape. The audio tape of the six-year old, with the other little girl crying for her papa at the same time. https://www.propublica.org/article/children-separated-from-parents-border-patrol-cbp-trump-immigration-policy

The so-called leader of this country of immigrants is doing lasting damage by using children as bargaining chips. A pediatrician who visited the camps called what’s happening “Federal child abuse.”

And to do nothing does make one complicit. People I respect and trust have suggested these links as ways to help, and I donated yesterday. I’m sure there other opportunities.

I responded to Save The Children’s appeal and signed their petition telling Congress that Families belong together:  https://savethechildrenactionnetwork.org/actions/tell-congress-that-families-belong-together/

So often I speak here of children and parents and love. It’s heartbreaking to write this post.

Despite uncharacteristically gloomy SoCal weather, after Alaska we spent a week following Sweet Baby (turned three in March, no longer a baby either) as she went about her activities.

She attends a beginning ballet class on Sunday morning. From the hallway adults watch on video, as the teacher mixes classical ballet positions with exuberant movement for tiny tykes in leotards and ballet slippers. Sweet Baby practices at home – sits just like a little Degas ballerina with arms wrapped around one knee, the other leg tucked under her, then rises when the spirit moves her, skips, and becomes a butterfly. She loves the bounce of a tutu, loves all costume-like dressing – combines gauzy skirts with layers of aprons and headbands and often a floaty cape made of something repurposed.

And Tuesday and Thursday she attends pre-preschool with one of her parents. California is a different setting for school than I’m used to – the classroom is in a huge old house, two gracious rooms with windows and high ceilings. Wooden blocks, wagons, dolls, dollhouse, and dress-up clothes litter the wood floors during playtime. Circle time is shorter.

So much activity is outdoors, Sweet Baby’s class eats snack at a curved table under a pergola, plays in a garden full of tall hollyhocks, blooming jasmine, and vegetables beds planted by the children.

The rest of the old house and other buildings around the grounds are for the higher grades. I watched first graders, wearing sun hats and wielding shovels, working in their garden, and middle schoolers heading off to orchestra practice, hauling their instruments along paths under huge oaks.

During a trip to the Huntington Gardens on Wednesday we saw their children’s garden – no conventional playground equipment but rooms to explore and tunnels to crawl through created by green hedges. Little fountains in stone bowls on the ground feature fish that spout a knee-high burble of water randomly, apt to splash the unwary and delight small folk. A topiary volcano erupts with water mist and, in a greenery-surrounded room, jets of cold steam make a fog so thick that Sweet Baby worried when her mom disappeared into the mist.

Fridays are for swimming lessons at a huge complex of swimming pools near the Rose Bowl. But it was cancelled that Friday, our last day and the only sunny one, so we visited an old-fashioned garden center in Pasadena and came home to spread three big bags of compost, plant hollyhock and lamb’s ears, and sit under the pergola Sweet Baby and her dad built over many weekends last year.

Every night we stretched out the Royal Wedding into a week of pleasure by watching the rebroadcasts – didn’t you love every bit?

It all ended too soon, Sweet Baby’s Thai relatives visited for almost two months just before us, so this departure snuck up on her. When we left, her dad told us she said: “But what we gonna do?” 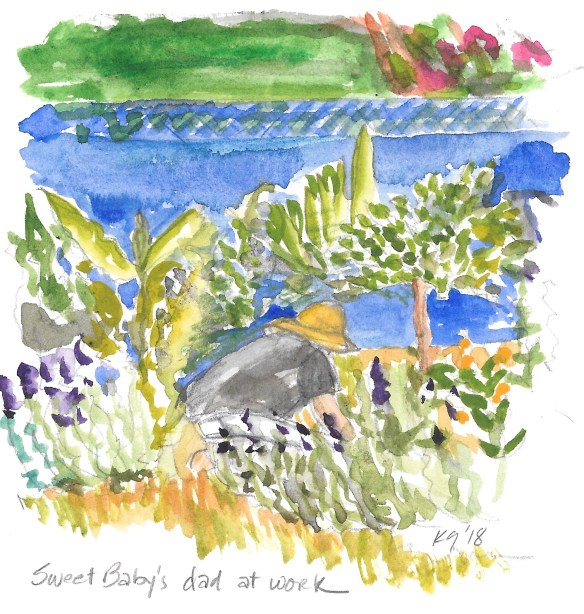 For four days in May, while Mrs. Hughes celebrated her birthday with her sister and her best friend in New York City, we flew north to help Mr. Carson hold down the fort. (He doesn’t really need much help.) Chill from the north wind dampened the days of our visit, but didn’t dampen Alaska spring activities.

Pretty much nothing is cuter than a six-year old girl with braids and a ball cap playing her first baseball game (after just two practices). Standing by the dugout full of tiny teammates, I watched the swing and heard the satisfying smack when bat connected with ball pitched by her coach. Braids flying, she headed to first base, a little uncertainly at first, and then swiftly!

One day Lady B’s kindergarten teacher planned an excursion to the Municipal Greenhouse and nearby woods, and asked me to lead a little watercolor demonstration. She provided good materials (that can make all the difference with watercolor) – tiny palettes with six real watercolors, fine line pens and brushes with points. The students didn’t need much direction, and soon scattered around the greenhouse to draw – watercolor paper taped to clipboards – then came together in a circle to paint. The penline and watercolors produced amazed me by their careful observation of shape and color, each unique to its creator.

It struck me that the days of Lady Baby are behind us. That little girl in the orange t-shirt, worn over a red, long-sleeved thermal shirt with Tyrannosaurus rex on the front, seems far from anything with baby in the title. The girl formerly known as Lady Baby has school life and social relationships of her own now – two best friends, a girl with a mop of blonde curly hair, and a boy with dark curly hair and big glasses. Maybe now I call her Lady B, a more grown up title, because Baby Brother (who rapidly outgrows that moniker) calls her Bopal.

We spent great days with Baby Brother while Lady B was at school. Playgrounds please, but nothing is as popular as “owside” – the back yard with swing and slide and balls to kick – or a slow amble down the sidewalk out front.

He loves books – specially ones with pictures of “boom boom crash” providers, particularly enormous bulldozers and crane trucks. Lady B reads to him, revisiting all the favorites (dinosaurs). He laughs with the same joy and relief at the resolution in “Knufflebunny” that I remember from her.

When we first arrived I marveled at his mom’s understanding of his language, but as the days passed I began to get it better. He repeats everything said to him – so the structure and intonation becomes more clear, and you realize how much he can communicate, if only his listener understands. He says all the family names, but somewhat curiously, Lord Cromwell became “Bacram.”

It sounds odd to say of someone so young (he’ll be two in early September), but he seems contemplative as he thoughtfully considers things. I say: “Look, chickadees – chick-a-dee-dee-de.” And he listens and looks, head tilted to one side, before repeating the call. It’s easy to be totally silly with him and make up nonsense, eliciting great grins and chuckles.

I loved watching Lady B and Baby Brother greet their mother when she came back. Both brave while she was away – and overjoyed at her return!

*Image used by permission of the artist