In an attempt to extend summer for the next few weeks, I’ll post the series of flower paintings I’ve been working on (now packed up to take to BAC Gallery in Winslow on Bainbridge Island).

And with the flowers, I wish you a long, peaceful end to this summer! 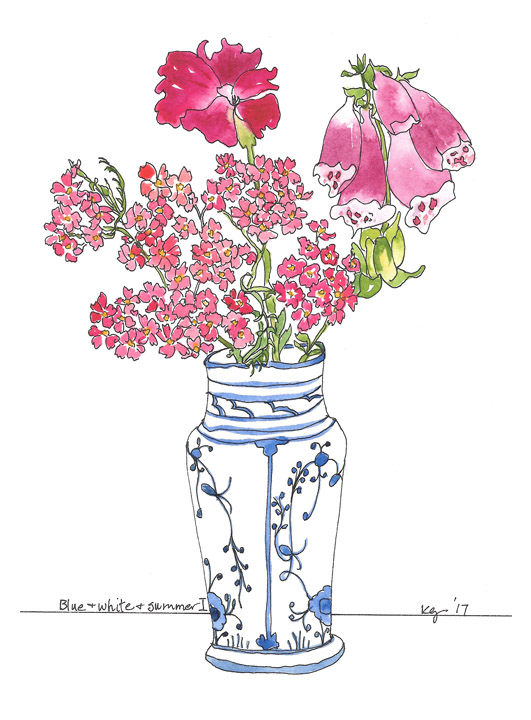 In Rome, the Val d’Orcia heat persisted as we joined other tourists near famous sites: an impenetrable cluster around the Coliseum, mobs being shushed in the Pantheon, people packed around the Trevi Fountain. But the eternal sites are still rewarding.

One day we all rode the Hop-On Hop-Off sightseeing bus, and Lady Baby and her family pedaled around the Borghese Gardens in a “surrey” – a family bike. Another day they took a tour of the Coliseum geared to children, while Baby Brother sat happily on a comforter on our apartment’s tile floor. He played with his traveling toys, empty boxes, plastic bottles, and utensils scavenged from the kitchen. The day her parents toured the Borghese Gallery, Lady Baby learned the rudiments of chess from her Uncle Tu Tu and dissolved into private laughter with her cousin.

The Testaccio neighborhood might be the place to stay in Rome – quiet streets, few tourists, lots of interesting food, and a fine playground. On an early morning run, Mr. Carson discovered Testaccio’s Nuovo Mercato, and led us back later. Mrs. Hughes and I sifted through piles of riches in a stall selling vintage linens – white cotton tablecloths and pillowcases embroidered with images of teacups or countryside flowers, with and without lace – deciding who would like what.

Trips usually include the unexpected – but countless warnings predicted our first pickpocket experience: at the Barberini metro station, crazy busy on a Sunday evening, two girls oddly pressing close as we boarded the Metro, then Poppa Jim discovering an empty front pocket.

And that mishap led to another new experience – filing a police report in Rome (not in hopes of recovery, but perhaps insurance). We learned the appropriate agency was not the carabinieri but the polizia – where we were initially turned away from the station, told to sit on the curb and wait, and then finally admitted. A helpful officer took our information, covered a copy of her report with official stamps, and remarked: “You don’t expect us to do anything about this, do you?”

We retreated to Eataly, the enormous Italian food emporium where you can sit at one restaurant, gather food from any other, and eat together. Sweet Baby’s parents bought us dinner and groceries, and we called the credit card companies.

On our last day we set out early, stopped at a nearby “bio-café” for chocolate croissants, then followed the Trail Boss to the quiet neighborhood of Trastevere and the beautiful, 16th Century Villa Farnasina – few other visitors, windows open to the gardens, and walls covered with frescos by masters like Raphael.

The next morning we awakened at five a.m. to help the Alaskans depart for home. As the taxi waited in the early darkness, a sleepy Lady Baby stood still for a hug from each of us, then grabbed her mom and cried. So me too. The rest of us left Rome a few hours later.

It was such a privilege to be with all of these people I love for this long adventure – I am very grateful.

In Pienza we had an extra day: time for a laundromat and a break from daily walking for the little travelers. Both Pienza (a “masterpiece of human creative genius”)and the Val d’Orcia (a “well-managed Renaissance agricultural landscape”) are UNESCO World Heritage Sites. You experience both while standing in Pienza’s perspective defying, trapezoidal 15th Century square and glimpsing, through openings past the cathedral, the valley landscape. We could view the sweep of the Val d’Orcia from Pienza’s “balcony,” a low-walled walkway running the length of town, and trace our route, from hilltop to hilltop.

We were often in awe of Lady Baby on this trip – neither adult nor easily carried baby, but unfailingly patient and loving with her cousin and brother, and much of the time, an engaged tourist. Through headphones, she listened intently during a tour of the Renaissance Papal palace, elaborate rooms and a courtyard with herb garden, and inquired of the guide, “Exactly where is the sarcophagus?” Standing in Pienza’s cathedral with head tilted back, camera ready, she studied the frescoed walls and decorated ceilings and pillars, asking questions and making comments. Happily for all, a recommendation from the palace guide led us to Buon Gusto – another best gelato ever.

Early the next morning – wearing our Francigena T-shirts printed by Mrs. Hughes – we posed for a photo on the balcony and set off on the final leg to Montepulciano via Monticchiello (a revised plan to shorten to six a hot 13 kilometers).

Hide-and-seek by the side of the road and lifts from parents helped us to Monticchiello. We ate our sandwiches in a shady playground below this tiny, fortified town (important in the long rivalry between Florence and Siena), then walked about. In a bar we paused for ice cream and coffees, and the proprietor called us a van for the rest of the dusty, steep road.

In Montepulciano we stayed in the beautiful 12th Century Palazzo Ricci in a high up room, overlooking the city and countryside. Montepulciano’s playground improbably included a box hedge maze, and the cousins ran until dinnertime. We ate outdoors at a windy restaurant tucked up into the walls of the city, where a canopy overhead flapped vigorously, sounding like a tent on a mountainside. Some had a last ribolitta, and finally, the carnivores shared a long-desired bistecca florentina.

The Sweet Bride, Sweet Baby, Lady Baby, and I retreated from the dinner table and sat on the cathedral steps on the austere Piazza Grande, empty at dusk, surrounded by venerable palazzos. I said, in the way of adults, “Oh isn’t this amazing! “Just a town,” replied Lady Baby. I said “Really? Like Anchorage?” She said, “Anchorage has trees and grass!” I came back, too quickly, with something flip, then begged her not to tell her parents what I said. Nothing is more ruthless than a five-year old with power over you! I’ve never seen her laugh so hard – “I’m gonna tell them!” she shrieked and giggled, as I tried to convince her she’d get me in trouble – more peals of laughter.

I like to think of her someday bringing a grandchild to that historic square – and laughing.

Arriving in Montalcino, a small and walled hill town, famous for Brunello wine, we piled out of the van into midday heat and were led down a little street to our apartments in an old building (angled walls, wide wooden floorboards, and high ceilings). Later in the afternoon, we climbed to the ramparts of the fortezza for stunning views, walked part way around the town walls and up to the Duomo, and had a cheerful dinner on the edge of the town square. Under our windows that night, cars roared and accelerated up the narrow streets, noise amplified by stone buildings.

So the next morning a sleep-deprived group set off for our first day of walking – 11 kilometers to Castelnuovo del’Abate – up, along a ridge, and then down, often through forest on a rough track littered with stones slippery underfoot. The heat was a dehydrating bludgeon. (At some point on this journey, Mrs. Hughes allowed as how “choosing to be uncomfortable on a trip” was a Gilmore thing. Some truth to that.)

At first, kicking a soccer ball with the little travelers on the strade bianche and lots of snacks helped us along. But soon Mr. Carson loaded Baby Brother in the Ergo on his front, Lady Baby into the backpack, and then ferried his sleepy children the rest of the way! We carried so much water, but bottles nearly emptied by lunch where we stopped in the churchyard of a tiny hamlet. A passing resident led us to a spigot.

Exhausted, we arrived at the base of Castelnuovo del Abate at a guesthouse with kind owners. While the girls ran about the courtyard (using stored energy), dinner revived us, and we talked about the next day. An ominous warning in the route booklet: “please note this is probably the most demanding leg of your walk” – led Mr. Carson to offer to ride with the baggage and his children. Then we all decided to ride, except Mr. Carson who opted to run.

Always in Italy, comfort and delicious food can mitigate much self-inflicted hardship. In San Quirico d’Orcia, we found the Tuscan hotel you dream about – Palazzo del Capitano – with cool, spacious rooms and a beautiful garden fragrant with rosemary, lavender, and jasmine. Near the town square we ate the best chickpea soup ever, followed by vegan pistachio gelato! Soon enough Mr. Carson appeared, dusty but happy, confirming that the route would be brutal and relentless as a walk – all down, all up, and all hot.

The next day, nine kilometers to Pienza, followed stretches of the Via Francigena – for hundreds of years a major route from Rome to the north, and now small gravel and dirt lanes. The floor of the Val d’Orcia is a series of steep, short, ups and downs over clay hills, the roadsides ablaze with red poppies and yellow broom smelling like sweet peas and jasmine.

Every once in a while someone would exclaim, “ooh!,” – a reminder to look up at Monte Amiata in the distance, scattered cypress near farmhouses perched on hills, and wheat fields – all orderly, all beautiful. Occasional cars passed – stirring up clouds of white dust until they saw us (crazy Americans, the Italians must think). The topo map would indicate a little patch of trees near a stream, but we’d find a dry dent and scrub shrubs.

At lunchtime, we deviated off the road to an empty farmhouse and a tiny chapel “dedicated to the Madonna di Vitaleta – the suckling Madonna.” Because our group included one so honored, we excused our probable trespass, and gratefully ate in the shade of a lollypop-shaped tree.

And this leg Lady Baby walked almost the whole way, with only occasional lifts from one of her parents. She speculated about an abandoned farmhouse with an outer staircase intact but no wooden floors, an echoing empty well, and a stone outbuilding with a large oven. Toward the end of the day, water bottles reduced to hot dregs, we stopped at the 10th Century parish church of Corsignano, once the center of paths and roads on the Via Francigena, with a spooky crypt to explore and a fountain outside for thirsty pellegrinos.

Up a little road, walls looming on either side, to the square by the gate into Pienza. All the hilltop towns amaze, but Pienza is perfecto!