Maira Kalman often paints chairs, “Comfy Chair” depicts a warm-pink wingback with doilies, and she illustrated the book, “Lucky, Plucky Chairs” by Rolf Fehlbaum, told from the chairs’ point of view. From a Design*Sponge story I learned that Maira Kalman’s New York apartment has white slip-covered armchairs on a black and white rug, in a white room (except for art and treasured collections). Her exuberant paintings come from a tranquil, blank-canvas living space. 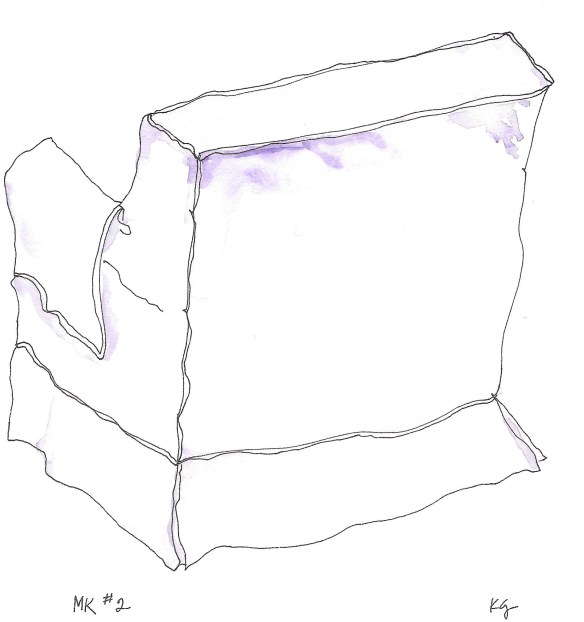 It’s a relief to wander the Internet in search of armchairs instead of news. An article  about Hillary Mantel’s writing room (with armchair pictured) appeared in The Guardian back in 2007, when she was “building her new novel about Thomas Cromwell.” Mantel says she writes “…in the main room of our flat, at the top of a former Victorian asylum in Surrey.” “If I feel travel would broaden the mind I take my laptop up a spiral staircase to a little room under the asylum clock.”

And the Wordsmith pointed out this recent interview with Penelope Lively who has a new book, “The Purple Swamp Hen and Other Stories.” She has an interesting thing to say about birthdays as we age. I love her novels and her memoir, “Dancing Fish and Ammonites,” which she described as a “view from old age.” She’s just finished a non-fiction book about gardening (I’m eager for that) – and she thinks about a new novel. “A writer writes,” Lively says – lucky for us. 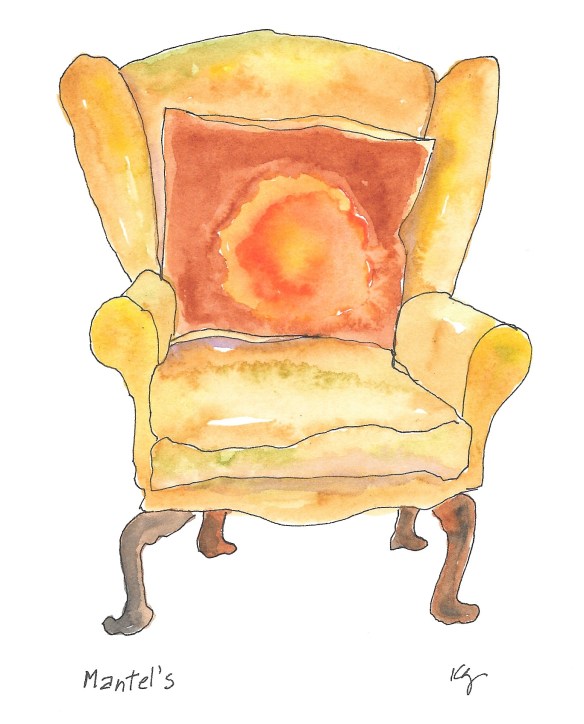 These armchairs live in the sitting room of a 17th Century Northumberland farmhouse full of “characterful vintage,” but I discovered them in the pages of a British edition of “Country Living” magazine. The owner of the house calls a sofa and the armchairs, “indigo-blue rescues.” Together with a red Turkish carpet, low table with tea things and books, and fireplace, they soften the stone walls and wooden beams of an old building. 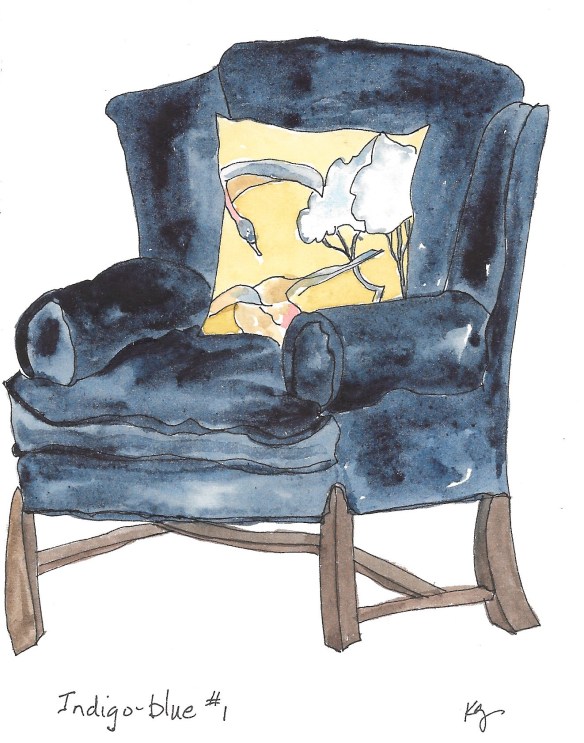 In addition to providing escape from the continual debilitating, depressing, mean-spirited news pouring out of the other Washington, the armchair project distracts from the iffy spring weather. Sunshine, we long for reliable sunshine! A yellow brocade armchair from a photo in “In An Irish House” provides it. My favorite part of the rattan armchair from Kauai is the little needlepoint cushion picturing flower-trimmed flip-flops. 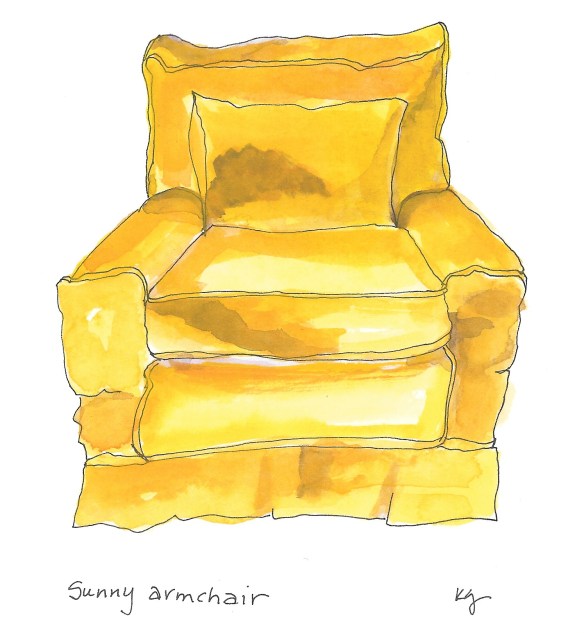 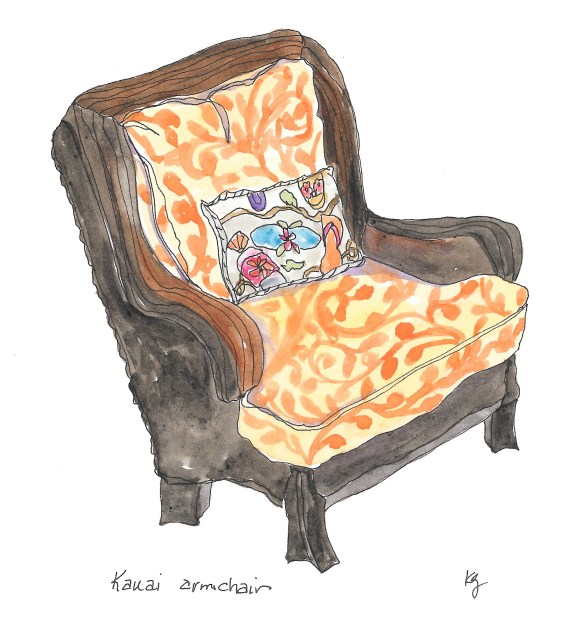 Baby Brother, eight months old, is now such a presence, full of life and love. He’s struggling bravely through teething, and his frequent grin revealed two teeth on bottom and one and a half on top – the last one emerging overnight (from a gum swollen for weeks).

He laughs readily – just waving a diaper over his bare belly brings a string of chuckles! And lying on his back, he smiles broadly and pulses his body up from shoulders to heels in response to a friendly face – Lady Baby calls it his “seal hop.”

He flings his arms wide and shudders at exciting things – food coming or a new large cube full of colorful, movable parts to manipulate. He looks intensely at a resident cat or dog passing by, and grabs a handful of fur when he can. He leaps high and long in his hanging jumper.

Using a “food feeder” to feed himself, he holds a lollipop-like handle and squishes avocado or banana or sweet potato through a cluster of tiny holes in the soft silicone top. He hums with enthusiasm when he eats (like his sister did, and his dad long ago.)

It’s easy to see how the differences between first and second born develop. Lady Baby is loving and helpful and the source of inventive fun for her brother. Baby Brother considers before reacting, waiting just a bit, observing. The benefits of surveying the situation might outweigh being in front.

Mrs. Hughes and I tackled some projects, and I’d like to say we cleared the slow drain in the bathroom sink. But, after figuring out how to undo the sink stopper and the P-trap, and detonating three baking soda and vinegar bombs, we called the plumber. A little more successfully, by working “around the edges” as Maggie O’Farrell says, we sewed hot weather clothes from gauzy muslin for Baby Brother. With Lady Baby’s help, Baby Brother watching from a nearby seat, we began to print the little pilgrim from the Via Francigena on T-shirts for an upcoming family adventure.

The Downtown Abbey playroom now doubles as guestroom – with space for sleeping, playing adventure guys, and, with a wooden rocking horse for footstool and tiny chair to hold a teacup, enjoying a favorite old leather armchair.