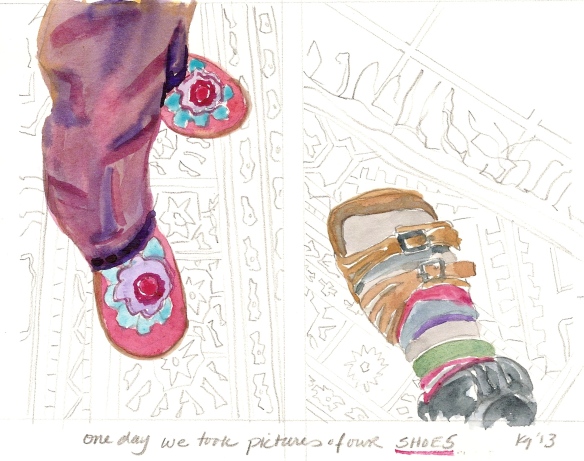 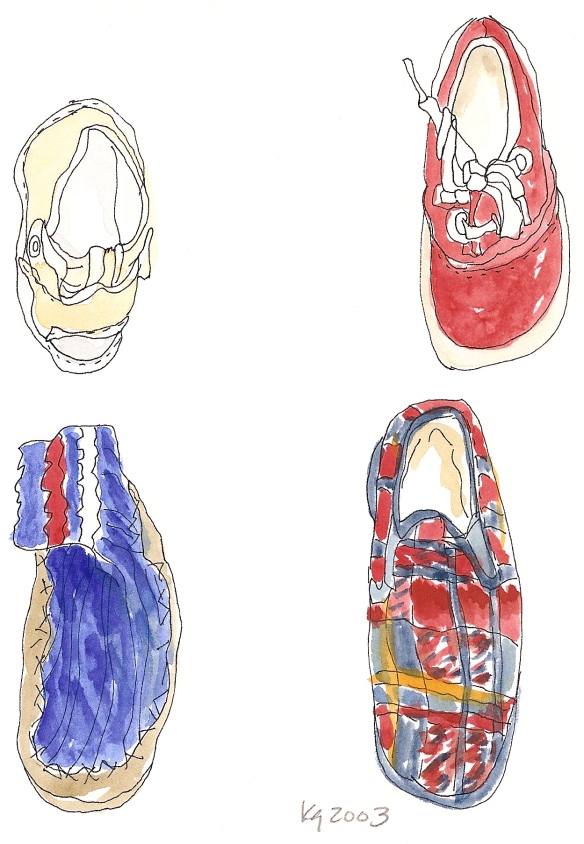 My husband tells me he will “KonMari” his closet. Slowly, in his own way, employing some complicated system of discarding one item one day, two the next, then three, and so on. Only just begun, he assures me that the end result will be as dramatic as Marie Kondo’s magical tidying.

How would it be to take your keen tendency toward tidy and, in no time, have your name become a verb! People either swear by Kondo’s methods or absolutely dismiss them (and you can probably see the difference in their houses). She loses me with her book ruthlessness, but I try with clothes and get most hung up by sentimental things (although I think she allows a few such items if they “spark joy.”)

But hearing my husband’s plan, I thought I should KonMari my workroom, specially the drawer of little drawings I have from all these years of the blog. What sparks joy? Then it occurred to me that this summer I might delve into that archive and select related images for some posts.

And so here we are into June – the last international postcard sent to my young friend as she headed home – and then some remixes.

Once, in a conversation with our English friends, our older son described himself as an Anglophile. I was silently tickled. His love differs from mine – he knows British history. He’s a fine resource, if inclined, to sort out Edwards and Henrys and their places in the whole scheme. And like his dad, he’s read so much about Churchill and the history of World War II that he’s a great back up for my literary approach.

Most times when reading I just succumb to this English prejudice. The wordsmith shares this bent, and has a particular fondness for the period just before the First World War. So for anyone who might share our proclivity, here are a couple of books from this winter.

Helen Simonson doesn’t live in the UK anymore, but she grew up in Rye in Sussex, and she returns there in “The Summer Before the War,” the Edwardian summer before war rumor became reality. At first I had doubts about this book because of the seemingly inconsequential village doings: the activities of a forward thinking aunt, her two nephews, and a new schoolteacher. But the very ordinariness of those summer days and predictable, if limited, lives are exactly what’s shattered by the awful reality of war. By the end of the book I appreciated the structure and cared about the characters.

Louis de Bernières’s “The Dust That Falls From Dreams” is an even larger family saga. It’s a lovely fat book that follows four sisters from one family, and the five brothers who live on either side of their large county house south of London. An inseparable group, the nine are young when the book opens and tight in the way of childhood friends.

And then the war happens and affects them all, whether they go as soldiers or nurses or stay on the home front. And when de Bernières brings them home afterwards, they’re changed, and they return to an altered world. Both the wordsmith and I found ourselves stalling toward the end, not wanting to part from this group of characters and the privilege of reading their lives.

Cross the channel quickly and fast forward to the Second World War and an American author for a third possibility. Mrs. Hughes recommended “The Nightingale” by Kristin Hannah as a great book for a long airplane trip. And it is. Set mostly in occupied France, with romance and adventurous crossings of the Pyrenees, it’s the story of two sisters and the war’s impact on their lives – a tale of German occupation and French resistance. Sometimes scary and sometimes sad, it’s a very satisfying page-turner.

All these books are so readable, so engaging. So perfect for summer.

Lady Baby and her dad flew down on a Friday in the middle of May and spent the weekend – a father and daughter trip. We met them in Seattle where Lady Baby outlined the immediate plan: “Ride the ferry, eat dinner, drive to the Buffalo!”

The next day, drizzly and gray, we all wandered up the beach searching for treasures like special rocks, the shells of limpets, oysters and crabs, particular pink seaweed, and kelp “balloons.”

That afternoon Lady Baby and I visited the Port Townsend Marine Science Center at Fort Worden. It’s housed in an old building on an equally old wharf, and dedicated to inspiring conservation of the Salish Sea (the name for all the connected waterways in this part of the world). Water from the Bay below constantly circulates in and out of several touch tanks and a tall aquarium containing fish, sea stars, sea anemones, sea worms, chitons, urchins, and more. A magical place.

The Center teaches by touch. We learned to touch only the tops of sea stars to protect their vulnerable feeding tubes – and watched a large sea star efficiently pull a whole closed oyster toward its mouth on its underside (the stomach comes out of the mouth to accomplish this!). When touched, little feather dusters that sea worms stick out to catch their food instantly retract. While we watched a crab clean the scraps from a shell, a docent explained about crabs molting when they outgrow their own shells: “Imagine you have a zipper up your backbone and could unzip and step your skeleton out!”

We were often in synch with a little girl and her dad, visitors from Seattle, and soon the girls were sharing a sturdy footstool and concentrating together on the tanks – rapt. And as the visitors thinned out, Zofia, a young Citizen Scientist Educator, revealed the trapdoor/porthole in the old floor so they could toss an empty oyster shell back into the sea.

She asked if the girls wanted to see where “tons of crabs hang out,” and took them below the Center where the flukes of a gray whale float in netting attached to a dock. (After a whale washed up on a Seattle beach, the rest of the whale was buried at sea till the bones are clean and the skeleton can be rebuilt.) Wriggling crabs covered the netting, and fat bubbles from the whale bobbed to the surface.

Invited to look through a microscope (a first for both girls), they took turns gazing at teeny critters in seawater. Lady Baby said in that excited voice of discovery: “They are so small and then so big!” As we left, the girls dashed down to the beach together.

Armed with our new knowledge and intending just another rambling walk, we returned to the beach on Sunday morning. When she spotted a good treasure, Lady Baby stopped, patted her tummy, and called: “Guys, guys, come here!”

After her dad provided an energy bar and water snack, we found ourselves well into our daily walk along the beach, through a campground, and heading up a hill to the bunkers.

That hill always punishes. This time Poppa Jim suggested singing – singing? I thought – but it worked. Variations on “Wheels on the Bus” got us nearly to the top, and then a tossed piece of sticky weed took over – its Velcro adherence to our clothes causing much giggling and repeating.

A strong four-year old can outwalk us, the enemy is boredom, so for the rest of the hike we did the simplest, most failsafe kid-on-a-hike game – hiding! Oh she loved it – so delighted with her hiding skills. We would walk ahead, lamenting that Lady Baby and her dad had disappeared. What could have happened? Maybe she’d be at the sunny meadow because she likes sunny meadows, or maybe she was back at the car. Then she’d run up and “surprise” us, shriek in delight, and repeat.

On Monday she turned the drive down to the ferry into a long conversation. She’s figuring out what is real and what is not, what was in the past and what is made up. She told me people in storybooks were once alive but now dead (sometimes true I said, but I write stories about her and she is certainly alive).

We had a long discussion about her insect dislikes “red ants, mosquitoes, and bumblebees,” and why bumblebees might be removed from the list. And fun when she isolated words from the history podcast playing in the front seat and grinned in glee: monster “Oooh that’s scary,” or hero “Those are good guys.” She told me the guys on the podcast (Assyrians, Greeks) came before the dinosaurs.

The chronology is a little mixed up – but she’ll get it. Probably soon. What a wonderful visit.