Today is a big milestone – three years ago during a record cold and snowy winter, Lady Baby was born! For three years she’s inspired many words and pictures here, but soon she’ll be telling her own story.

Earlier this December, visiting Anchorage, we cut out Christmas cookies, played by the Christmas tree, and read our favorite Christmas stories. (Lady Baby pronounces the big day “kiss-miss” in the most endearing way.) She painted wrapping paper, and together we made handprint trivet tiles for her favorite people – even modge-podging the squares of felt on back.

I kept measuring this Christmas against others – its celebrations and traditions reveal so many changes.

My young friend, beautiful and graceful (and so grown up), who yearly stood on tiptoe on a stool to place a star at the top of our Christmas tree, this year twirled on her toes in her high school’s dance production – “A Christmas Carol” adapted as “Ebenezer” with hip-hop and ballet and dozens of exuberant young people.

And our little boys with huge grins (one missing front teeth) who posed by the Christmas tree have become loving and responsible husbands and fathers, themselves making Christmas happen.

Long-standing traditions come to an end. For more than 40 years, a grateful client of my husband’s sent a Christmas greeting – little gifts for the children in the old days, and more recently a fragrant wreath in early December. Nothing came this year.

Christmas cards arriving tell the tale also – a mix of delight in life – maybe a card from a new friend or photo cards from the friends of your children with children of their own – and missing persons.

A huge windstorm hit Washington while we were in Anchorage, and on our return we discovered two tall Doug firs broken in half, top halves toppled. We constructed our Christmas tree from the tops and some branches (with the help of duct tape and florist wire).

That’s change. One minute, as the top of a 50-foot Doug fir, you are living celestially with birds and clouds, then crashed to the ground, then decked with lights in a warm room. Anything can happen. And I’m going to try and pay even better attention to this miraculous life in 2015.

Early one morning in the Anchorage darkness, I walked with my old neighbor, while the eager Downtown Abbey dogs pulled us along. I told her this was so corny to say, but I was very grateful to be alive. And maybe not so corny, maybe a mantra for next year.

This is the last post of the fifth year of “Her spirits rose…” – holey moley. I thank the Wordsmith and my good-natured husband for their longtime, always incisive editing (though my husband will call this piece a mish-mash and say I “have too much going on”).

And thank you to you readers – so many for the whole five years! Here’s to 2015! 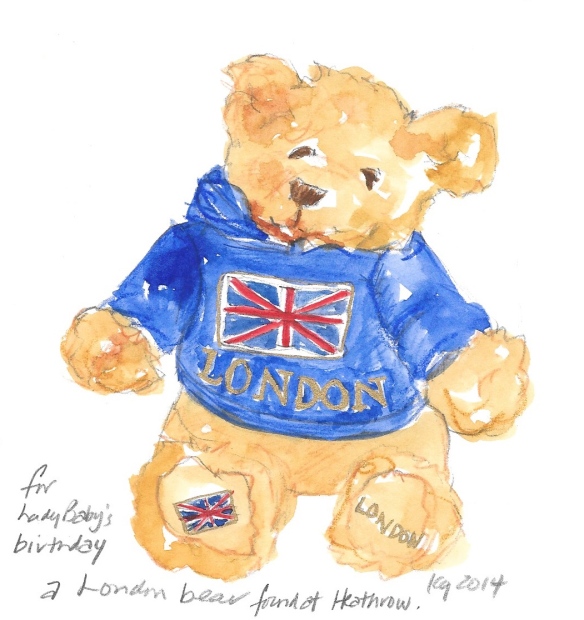 On Christmas Day public transportation shuts down in London – no tube, no buses. Nearly everything you read about visiting London in December warns about this closure and the difficulty of getting about.

So we had a plan – walk from our flat in Notting Hill to Trafalgar Square, and then to join a Charles Dickens walking tour. Our younger son, the trail boss, figured out the route, covering so much of central London with streets and buildings familiar from history and literature.

We opened stockings and ate a breakfast of scrambled eggs by candlelight (dark lingers late and comes early in winter London). Then we set off, the day chilly but sunny, past the shuttered shops of Notting Hill along busy sidewalks. (Closing the tube means all the below ground life suddenly appears street side.)

In Kensington Gardens fellow walkers, families mostly, chattered in many languages, children rode in buggies or skipped along with the international excitement of children on Christmas Day. People strolled, not the Londoner’s usual purposeful stride, past Diana’s Playground, Kensington Palace, the Round Pond, the Albert Memorial.

After Hyde Park, the trail boss pointed a line through the neighborhoods of Mayfair and Belgravia with deserted streets and no people – residents here might spend their holidays at country estates. An armed guard at the fortress-like American embassy managed a smile in reply to a “Merry Christmas” greeting.

Just before reaching Trafalgar Square, we stopped for a hot drink in an open (and very busy) coffee shop. We weren’t the only people fancying a Victorian Dickens tour on Christmas Day – a crowd filled the square, tourists but locals as well.

A few nights before, we’d been to a performance of “A Christmas Carol,” staged in a small theatre just off Piccadilly. On the tour we learned that the theatre was located close by the notorious and miserable blacking factory where Dickens worked as a child, and that he, too, loved to walk in the countryside and in London.

The walk was cold! Like penguins we huddled around the guide who read bits from Dickens novels, standing on streets where Dickens lived, and outside one of the many pubs named for him.

We had arranged for a car to pick us up, and after a long day in the cold on foot (six miles by the sweet bride’s pedometer), the toasty quick ride back over the route we’d walked gave a taste of a whole other way to be in London.

In the tiny kitchen of our flat, we turned our traditional comfort meal festive – spaghetti, Lady Baby style zucchini, salad – and miniature mince pies from Ottolenghi. We ate by candlelight and the warmth of the little gas fireplace.

Then, feeling like true Brits, we watched the Downton Abbey finale on the telly (never mind we hadn’t seen any previous episodes). A memorable Christmas Day.

And I’m wishing you the same – with all your important elements in place!

Last December, when we went to London with our younger son and his sweet bride, I thought about my favorite parts of the holiday, wondering if we’d find what I treasure – joy and laughter and love for sure, the cheerful ghosts of Christmas past, and some specifics in the present.

We brought family with us – a critical component, and made a bare bones flat in Notting Hill home base. It was the sweet bride’s first trip to London, Harry Potter and Harrods’ led her list, but by the 21st the fact of Christmas became more pressing.

Friends – a warming Christmas element – were in short supply. We did eat dinner one night with our English friends at their cheery house (ironically, they left the next day for the States to spend their holiday). They gave us a small, bright red poinsettia for the flat’s fireplace mantel.

London provided wintry weather aplenty – rain and wind or clear, cold days – appropriate for the woolen hats and scarves we bought as small gifts to stuff stockings from home, and hung by the fireplace with care.

Solstice night we joined a walking tour to view Christmas lights – Covent Garden and Oxford Street a-twinkle, and giant white snowflakes glittering between the buildings in the tiny lane leading to St. Martin’s Square. Shoppers gathered in front of store windows with Victorian Christmas scenes – the kind that only huge and old-fashioned department stores can offer.

My family later reported spotting that Christmas tradition, “Love Actually,” playing on a big screen in the outdoor part of a pub. I missed it while talking to a fellow walker or I would have returned!

We played Christmas music on a tiny speaker for the iPhones, and heard the live BBC broadcast of the Festival of Carols. (I associate that with early morning on Christmas Eve in Anchorage). And by Christmas Eve, awash with the memories that color the holidays, I wanted to gather food for a feast – even if small.

Dramatic Christmas trees decorate public London – each year the City of Oslo presents the people of London with a huge tree that dominates Trafalgar Square (given in gratitude since 1947, for assistance during World War II), a red velvet tree designed by artists for the Victoria and Albert Museum filled the foyer there, and in Covent Garden’s Piazza giant red balls and white lights covered an enormous tree that stood in a whiskey barrel of startling size.

The bay windows of London townhouses seem designed for Christmas trees, and in our neighborhood one stood out. I opened the gate, snuck inside the tiny front yard, and took a photo. A book tree! Books artfully piled and strung with white lights, broad at the bottom and tapering to a skinny top where an artist’s wooden figure stood with arm raised in good cheer.

We had noticed trees for sale in lots tucked into spaces beside churches and in the entrance areas of big stores. I longed for one in spite of impracticality.

Finally the sweet bride and I cobbled together a tiny tree – evergreen boughs fresh with fragrance from a florist shop tied together with red ribbon, decked with a miniature string of colored lights, and topped by a star cut from shiny paper.

The basics of Christmas magic in place – off to bed!

A brief interruption in what begins to be the season of red and green all day, every day!

A new session of The Workroom is forming, and I wanted to let you know. Perhaps you’d like to put something for yourself on your Christmas list? The dates are 5 January to 13 February – six weeks to pursue a creative project (and that can encompass many, many things – if you wonder about what you have in mind, please email me at herspiritsrose@gmail.com – I’m betting your project would work).

More information here on the blog, including a little brochure describing The Workroom:

Here’s to new beginnings in January – and now, quickly – back to the season at hand!