At the end of May and beginning of June, we (my good-natured husband, our younger son, and his sweet bride) were lucky to do another ATG walk in Italy (from San Gimignano to Siena), spend a little time in Florence and Rome, and then four days in Istanbul.

As I began to write this post, I realized that just a week earlier I spent the morning at Istanbul’s Grand Bazaar and the afternoon at Topkapi Palace. Late that afternoon I sat on the hotel’s rooftop terrace reading news reports of ongoing protests and a year-old article by Dexter Filkins about Turkey’s Prime Minister Erdogan.

From the roof I could see – across the waterway where the Golden Horn, the Marmara Sea, and the Bosphurous all meet – the skyscrapers of modern Istanbul and the location of Taksim Square and Gazi Park, scenes of the demonstrations.

The hotel was in the old part of Istanbul, the Constantinople of history and novels, for more than 2,000 years the center of trade and commerce, adventure and conquest. A short walk or quick tram ride from the hotel led to major sites: the Hagia Sophia, the Blue Mosque, and the Basilica Cistern built by the Romans in the 6th Century and filled with eerie light, Medusa head sculptures, and 336 marble columns.

Fortified, developed, conquered, and embellished, Istanbul is so old – both exotic and modern, linking Asia and Europe. Women in burkas, women in tank tops, many in headscarves. Young people with Twitter accounts making themselves heard,

My body is here in the Northwest again, but my mind is really unfocused. I’m trying so hard to figure a way to absorb – and share. I haven’t so many notes or drawings as I’d hoped. But I have desire to tell and energy is slowly returning.

Maybe a little chronology, but mostly I think about individual moments and objects – having to buy wool hats and plastic ponchos for walking through Tuscany, apples from many sources, the sweet bride’s pedometer showing 4 miles on a “rest day,” roadside shrines and astonishing mosques, and ibuprofen and cough drops from an Italian pharmacy.

So what follows here for a while will be not so much a tale as a medley of travel notes, realities of travel, spirit lifters of travel. 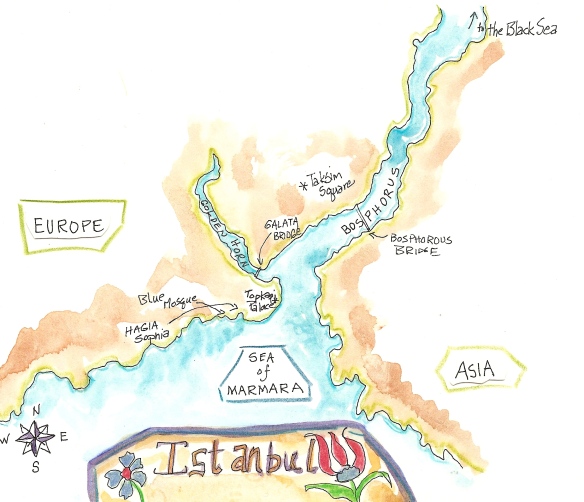 5 thoughts on “A Tale of Istanbul and Italy”