On the day after Thanksgiving, my clever friend is giving a shower for the sweet bride. She’s asked guests to bring a little gift, a “favorite thing that makes regular life happier when you are seriously cooking, puttering in the kitchen or setting the table,” a picture of you on your wedding day (if appropriate), and a favorite recipe.

It sounds like fun for sure – a treat to honor the bride with this American tradition, a gathering of women who care about her. It will also be a chance to see a variety of wedding dresses – all very different from her pale-pink silk dress for next January’s wedding in Thailand!

I wrote out a version of Molly Bartlett’s “Cranberry Pumpkin Squash” for my recipe. We’ve had it once made with tiny pumpkins and once with acorn squash. It’s cheerful, seasonal, and tasty – and the sweet bride loves squash.

The recipe calls for two small pumpkins or acorn squash, cut in half lengthwise, with seeds removed. Place the halves in an ovenproof dish with a lid.

In a saucepan, combine one-half cup of fresh cranberries, one small flavorful apple (cored and chopped into pieces), a quarter cup of currants, one-half cup orange juice, a tablespoon and half of honey or maple syrup, a tablespoon of melted butter, and a pinch of salt. Heat until the berries and apple are just tender.

Fill the squashes with the berry and apple mixture, (I added chopped pecans), cover the dish, and bake till the squash is tender, about 35-40 minutes. Pumpkin orange and cranberry red – festive and delicious.

And the wedding dress picture: our wedding was late September 1969, and a judge flew his small plane to a lake cabin in Alaska to marry us. Those facts surely explain my homemade, pumpkin-orange wool dress!

In early November on my visit to Downtown Abbey, Lady Baby was a few days into her new job as a crawling investigator. For two days we ignored the toy boxes in the living room, as I followed her hands-and-knees progress around the house. But on the third day she figured out how to clutch adult hands and cruise upright – a position she seemed to prefer!

Selma Freiberg wrote “The Magic Years” a long time ago – but her description of a child’s “periods of equilibrium” exactly named Lady Baby’s equanimity this visit.

Her teeth, six so far, are not only through – they are functional. She picks up with her fingers bits of avocado or cheese or Os – puffy circles that seem made of vegetables and air. She captures each one between her front teeth and carefully crunches.

She varies the volume of her concentration hmmmm as she eats, and leans over companionably when I sit next to her at breakfast. While I offer her a spoonful of oatmeal and take a bite of my own, she holds my wrist and investigates rings, watch, bracelet, humming all the while.

The humming sound must have to do with language, she does it as she “reads” books. Approaching an adult bookshelf, Lady Baby pulls out a volume, lowers herself, sits, and, while humming nearly an ohm sound, opens the book’s cover, and concentrates on turning pages. Then she selects another.

Real words come sometimes. She said “book” twice one morning to her mother. And to the surprise of all of us – while looking at grandpa – said “grandpa” twice.

She’s learned that we respond to her shiver of delight – a look of glee that tenses jaw and arms as she lifts them and smiles – and we react with the same movement. The shivers seem to be excitement – spotting her mom, a cat, the dog, or shoes. To get a shoe in hand with buckles and laces is a coup!

Crawling is functional, but guided walking was the big thrill – round and round the downstairs of Downtown Abbey – a circular route, not at the level of a carried baby, or the low down reach of a crawler, but a new height. She stretches one hand out for cabinet handles and drawer pulls, but mostly keeps moving. Walking fast, walking slow, delighting in direction decisions, executing U-turns. Every morning, and after each nap, we started all over again.

A very particular right foot first and straight out lurch-step gave way in a couple of days to an efficient right foot/left foot rhythm. She practiced periods of supported standing – reading books while leaning against a footstool between adult knees, or listening to cheerful songs her mom turned on for us – her little knees bending in time to the music.

Suddenly it is thoroughly November, damp and dark. Thanksgiving is only two weeks away! It’s time to embrace the upcoming holidays – such a hedge against the darkness with cheerful lights and color and food.

To get going I always need to inspire myself a little though, so, in a first for Her spirits rose…, just for fun, and in honor of the coming holidays (and in keeping with general jubilation and celebration of a hopeful four more years of moving forward!), I thought I’d try a giveaway on the blog.

When my book “The Year in Flowers: A Daybook” went out of print, I bought the last two boxes. They aren’t making anyone happy in my closet, so three copies are on offer in this giveaway.

“The Year” is a perpetual journal, divided into months but usable for any year – with blank pages for journal entries and record keeping. People have used it to keep track of daily happenings and as a garden or house journal. It’s full of illustrations, and each month has a little essay about finding flowers in my Alaska life.

To enter the giveaway, please leave a comment below about what you look forward to in this season – some little detail about how you organize, a memory of holidays past, or a favorite thing or tradition. Tell how the season makes your spirits rise!

Please comment on this post, “A Giveaway,” by Thursday, November 8 to be included. A random number generator will select three names, and I will mail the books to winners.

I really appreciate the readers who comment here. If you are new to commenting – please join in! After you write your comment, WordPress will ask you for your email to make sure you a real person and not a robot, but the address will not appear in public.

I hope you will participate – I’m looking forward to your holiday thoughts and ideas.

That’s a stretch – the title, but inspired by a great Saturday in Brooklyn on our New York trip, and by the fact that The Workroom was always in my mind while we were there.

On a chilly but sunny day, our trail boss (younger son) figured out the subway and walking routes so we could explore Brooklyn neighborhoods, then walk back across the Brooklyn Bridge – a walk crowded with people and an ongoing view of the Manhattan skyline.

The sweet bride debated and debated about a dressy clutch purse with a decorative chain, put it down reluctantly, turned away, then reconsidered – but already it was gone. And at a stand full of letters from old printing presses, I bought the letters to form the words “The Workroom.”

This fall session of The Workroom is over now, but what a pleasure it was to feel the excitement, enthusiasm, and energy of the group, read about their projects, and watch progress. The participants did form a supportive community as they made individual postings on their pages, and commented thoughtfully on each other’s creative endeavors – beading and biography, writing and watercolor. Joining in from scattered geographic locations – from Alaska to Wyoming – they did meaningful work and discovered commonalities amongst themselves.

For the weeks of the class, I enjoyed offering a daily post to support them as they learned to navigate The Workroom’s blog, about list making and time management, and ways to present their work in the wider world. Each Friday I was delighted to see the completed “assignments” on their pages – read of the struggles and pleasures in doing their work – then comment on their pages full of images and writing.

In case you are curious about what the participants thought, with their permission, I’ll post some of their reactions to The Workroom on katygilmore.com. I lean toward offering a winter session in January – it was a pleasure.

And now – thanks to a day at the Brooklyn Flea – I can stamp “The Workroom” on my three-ring binder full of six weeks of posts about creativity.

On a blue crystal day like September 11th, 2001, we emerged from the subway at Fulton Street across from tiny St. Paul’s Chapel, recognized from reports of that day, and now surrounded by a huge construction zone.

The entire site where the Twin Towers stood is fenced off now, but won’t always be. Standing in a line full of tourists, snaking back and forth, listening to the babble of languages, gave me time to think about that day and how different we are now. Time to picture, or try to picture, the whole area covered with a mountain of debris, and to wonder about the adjacent old buildings – still standing – and to admire the shiny new ones attended by cranes.

But once through the elaborate security checkpoint, a roar of water muffles voices and the rumble and screech of construction, the line dissolves, people disperse on a tree-covered plaza, and the reality of absence, of what’s missing hits.

Your eyes go first to the new buildings arising, a complex of towers. The angled wall of one exactly reflects the sky, but a line of tilted windows makes dots like an airplane’s contrail. The slim shape of the tallest, 1 World Trade Center, brings to mind movement, an arrow-to-the-earth shaped façade bringing the eye down fast.

Memorial pools fill the Twin Towers’ actual footprints. Waterfalls cascade 30 feet down the four sides of each pool to a flat surface of water, broken by a hole where the water disappears – all rapid, all noisy, all on the edge of scary. Scary and beautiful. The water catches the sunlight and flickers gold like flames.

I wasn’t prepared for how moving and perfect these torrents of water are, disappearing into a hole – a void in the center. Victims’ names are carved on a waist-high parapet around each pool. Eventually a 9/11 Memorial Museum will tell the tale of the day and honor the lives of the victims.

The site stirs up memories of the uncertainty of the day and images of streets full of ash and desperate people. There are countless reminders of New York’s first responders. And something about being here in the middle of such commercial activity, unexpected department stores and, of course, offices, makes you think about the ordinary people who died.

With the construction around, it also seems now to be so much about what people do. They go on living, rebuilding, go on growing like the 400 swamp oaks planted on the plaza surrounding the pools – and the one tree left from the original plaza. A Callery pear, found by workers as an eight-foot tall stump in the Ground Zero wreckage, was nursed back to health in a nearby park and replanted here.

The site is unbelievably beautiful and sad. Designed beauty to replace horror. 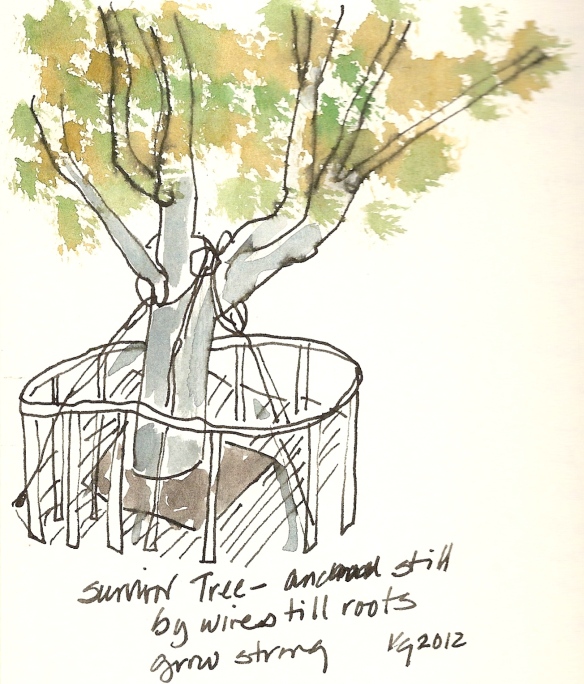