My one real rose began life in one of those 4-inch pots, a gift from a visitor who came to do a Fiddle Tunes workshop. I stuck it in a planter box on the ground and neglected it. I didn’t take it seriously.

But last year transplanted into a good-sized pot and and crowded with a stargazer lily, the rose flowered until December. The stargazer bloomed and perfumed last summer and has two budded stalks now. Buds formed early on the rose and shapely pink blossoms followed. Of course I wish for more.

In one of her newspaper columns, published June 25, 1954, Vita Sackville-West wrote:

“Dead-heading the roses on a summer evening is an occupation to carry us back to a calmer age and a different century. Queen Victoria might still be on the throne. All is quiet in the garden; the paths are pale; our silent satellite steals up in the sky; even the aeroplanes have gone to roost and our own nerves have ceased to twangle. There is no sound except the rhythmic snip-snip of our own secateurs, cutting the dead-heads off, back to a new bud, to provoke new growth for the immediate future.” 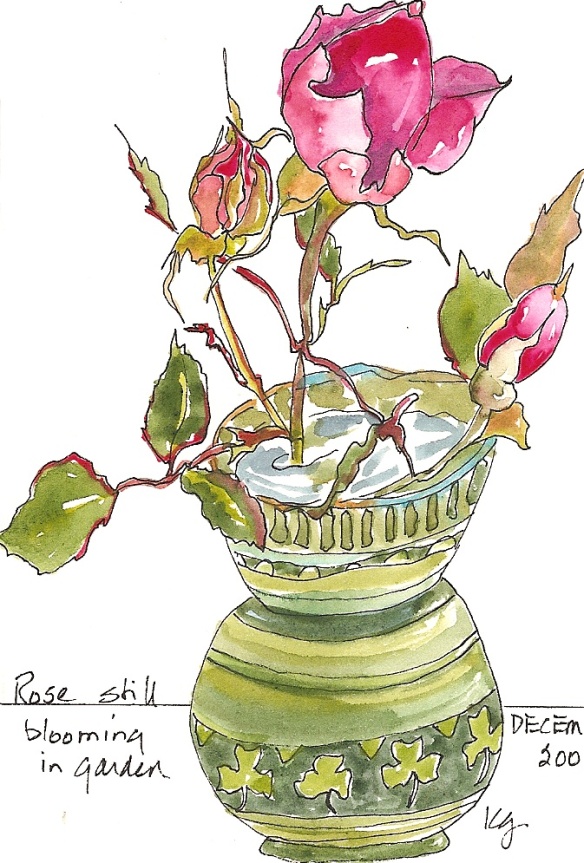