So much spinach! A big produce bagful from the CSA, when balanced on my tiny scale, weighed the perfect nine or ten ounces for a Spinach Feta Rice Casserole suggested by the farmer in the CSA newsletter. The farmer (Karyn Williams, Red Dog Farm) wrote feta in the title, but calls for cheddar in the recipe. I used Cotija – it’s that sort of forgiving casserole.

Planning ahead for a change, I made brown rice the day before. Then, while all the spinach (along with one tablespoon of water) wilted in a big pot, I mixed the rice with two beaten eggs, a third-cup of milk, two leek scapes (cut into half inch pieces), and a half-teaspoon salt. The recipe called for a cup of shredded sharp cheddar and half-tablespoon Worcestershire sauce (I used less cheese and Tamari sauce).

When the spinach is wilted, it’s added to the other ingredients and poured into an oiled baking dish. Bake at 325° for 40 minutes or so – till golden brown and set firmly.

We don’t eat so many casseroles these days as in old cooking-for-kids’ meals. I like popping the dish in the oven and having free time – happy as the aroma drifts upstairs to my worktable – but this time I gave in to the partially finished jigsaw puzzle left by departing houseguests. I wanted to just put it back in the box – but how can you leave all those jagged holes in blue sky?

Later, the blue sky intact, we ate the casserole (and discovered leek scapes, crunchy and flavorful in a salad, turn tender and flavorful when cooked) along with a salad layered with CSA fresh red butter lettuce, Haurei turnips, and pea greens. 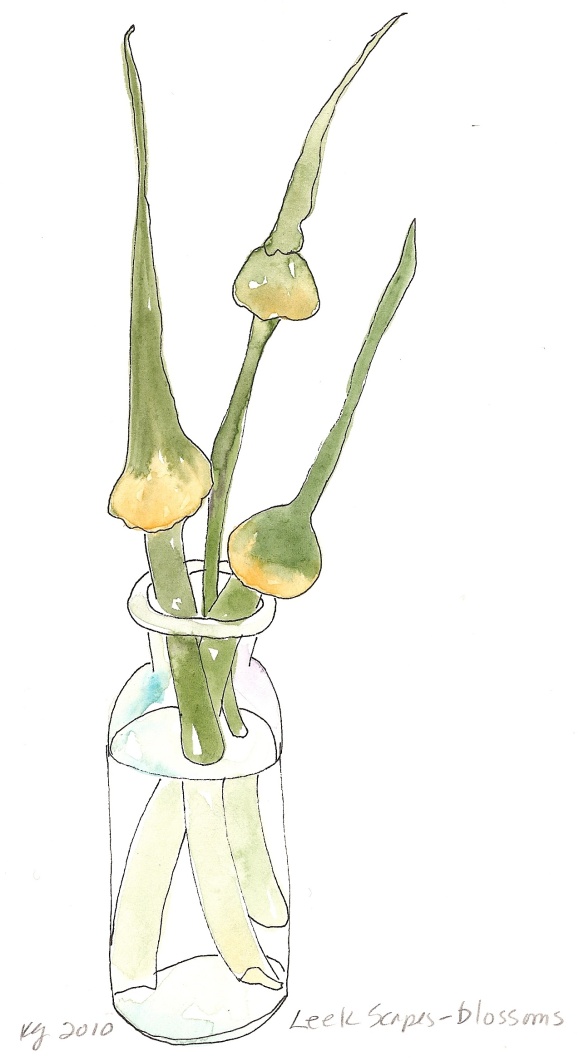 2 thoughts on “Spinach and Leek Scapes”