Gardeners say, when speaking of plants settling in: “The first year plants weep, the second they creep, and the third they leap.”

In January the third year here, there was no leap for me. My forward motion dissipated, January felt low-ebb with doubts of all sizes and shapes. My work appeared the most dismantled – a show scheduled but energy lacking.

In New Year’s week that year, I wrote “a year of order…” on the back of an envelope and stuck it on my workroom wall. I wasn’t sure what it meant – something beyond tidying up.

Structure supports order, so I began volunteering to tutor at a local school – reading with wee scholars twice a week and joined a yoga class. These made a sturdier framework for time – and reasons to go to town.

I let myself be engrossed using paper scraps from bookbindery friends to cover the spines of all the photo albums, transforming random, ugly plastic bindings into cheerful, colorful order. I felt a little foolish, it wasn’t real work – but gave me thinking time.

Discipline also underlies order – “showing up” as they say. I wanted to write and draw about this place and for two years had scribbled notes on scraps of paper, in pocket notebooks and daily journal. I hoped I could sink roots and gain nourishment by observing.

So I began, every day for an hour, to take my tiny computer and cup of tea to the window seat on the landing surrounded by books, I could follow the time-honored practice of just writing – and I could gather all those notes. It really is the doing that matters.

And here in the fifth January? Into the blogosphere – now that’s a leap. 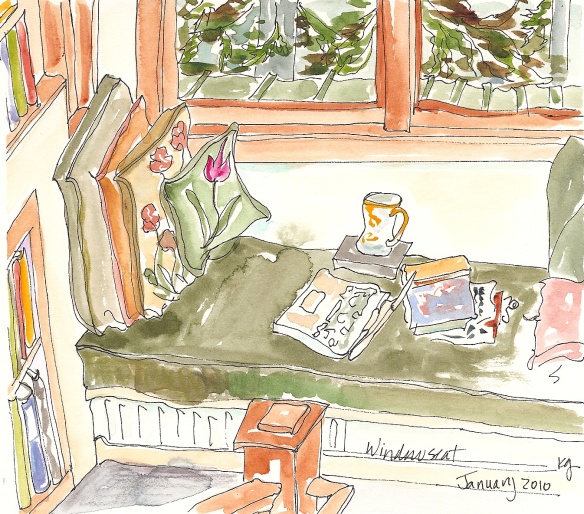 3 thoughts on “A year of order”